The shoot was a 100 bird sporting over 12 Stands, we had an early start with most entries arriving well before 9am to a bacon roll and hot drink. This was followed by a quick safety brief and an initial welcome by Roger Nash the SMaCSS Chairman who thanked everybody for coming to support us and gave a brief overview of the day. Once counters and scorecards had been issued everyone eventually made their way out onto the ground. The layout of the ground had been set up so the shoot could be kept into the sheltered area as the temperatures were set to rise above 30 Degrees, unfortunately this caused a little backlog of shooters. The shoot was a testing round with some stands that had been used for the English open  but still showed some good scores. The competition shoot closed around 1400 ready for a two course meal, this gave us enough time to collate all the scores and run a fun shoot for those that wanted a go. We then had a brief by Brian Steadman the chairman of NAMCSS who thanked everyone for attending and gave a short speech on the reason behind the shoot.

This was followed by the prizegiving and Raffle, overall high gun was Jason Rodes from West Lancs. We had a total of 80 attend with 70 shooters and thanks to their support and the kind support of Eriswell Lodge we managed to raise £1680 this is a fantastic amount of money.

On Behalf of SMaCSS we would like to thank everyone who supported us today at Eriswell Lodge and braved the wind and rain. We started the day with a hearty breakfast, which was thoroughly enjoyed by all. This followed a safety brief by Stuart and a welcome by our chairman Roger Nash, then it was outside for our 100 bird sporting layout that tested both novice and expert alike. Though rainy and a little chilly, there was still plenty of smiles all-round from the competitors throughout the day. After the shoot the scores where quickly collated to reveal a Masonic high gun of 75 for Chris Ray of East Kent and a 2nd for Phil Ramsey of Suffolk with 72. The Ladies High Gun was Lisa Brereton of Suffolk with 68. We then had a short speech from Paul Ashby on the awful situation in Ukraine and the funds he was trying to raise for the Ukrainian refugees, Pauls wife Lyuba is Ukrainian so understands more than most the difficulties these people will face. Stuart the owners of Eriswell Lodge made a very kind donation towards the appeal and SMaCSS also supported the appeal with a donation of £200. We then held a raffle to close the day, which in total helped us to raise over £1000.

The National Championships were held again this year after an enforced break. They should have been held in the Province of Dorset but Covid-19 had an effect on their arrangements and the National Association stood in in order for the competition to take place.Generally speaking, scores were high with one or two stands designed to sort out the best shooters. At the Presentation, after the buffet meal, the trophies were handed out by Rt W Bro Phillip Bullock the Provincial Grand Master for the Masonic Province of Wiltshire.

And Joe Dodds from Lancashire the Junior Trophy (59)

We look forward to next year in Norfolk

Thanks to Dave Smith & Shane Brereton for photographs

The sun shone, the weather was warm and the day was a pleasure to enjoy. Five hardy souls visited Hawley Shooting Ground for an Easter Sunday round of clays, Nick Jenkins, Rob Styles, Steve Ball, Andy Wilson and Roger Wilkes all enjoyed the fare from the “Chuck Wagon” before the 80 clay shoot began along with one the the largest turnouts seen for some time, Covid 19 is beginning to recede. Much fun was had and the support from all to each shooter was exemplary, or maybe I’m mistaken. The scores were Rob 67/80 Nick 62, Roger 52, Steve 52 and Andy 42. Scores aside the fun was the most important thing and here’s to the next time we, and the other members can be together. 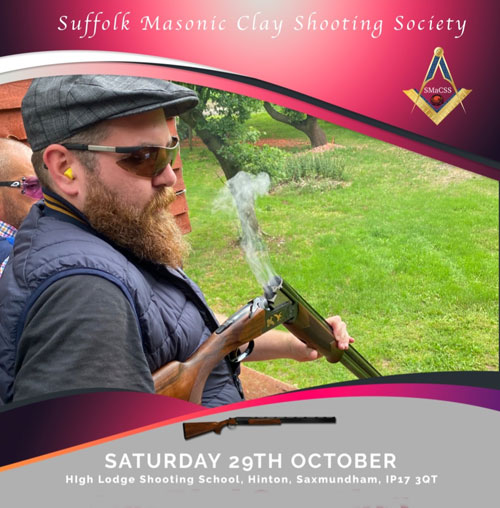 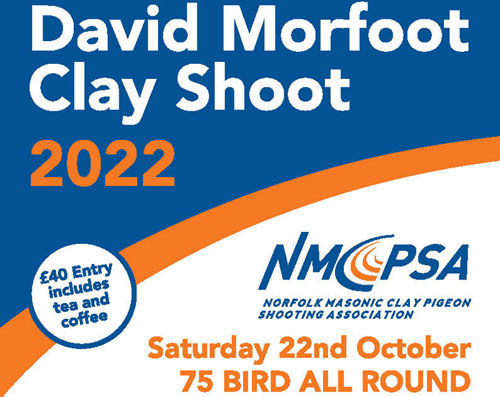 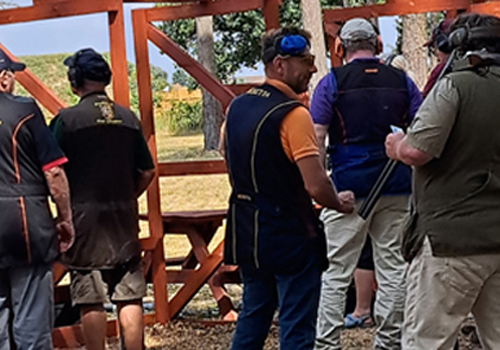 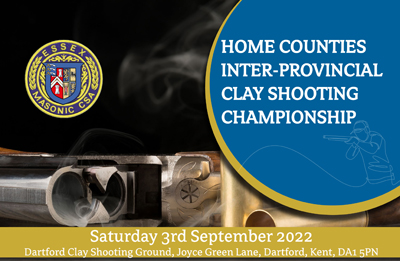